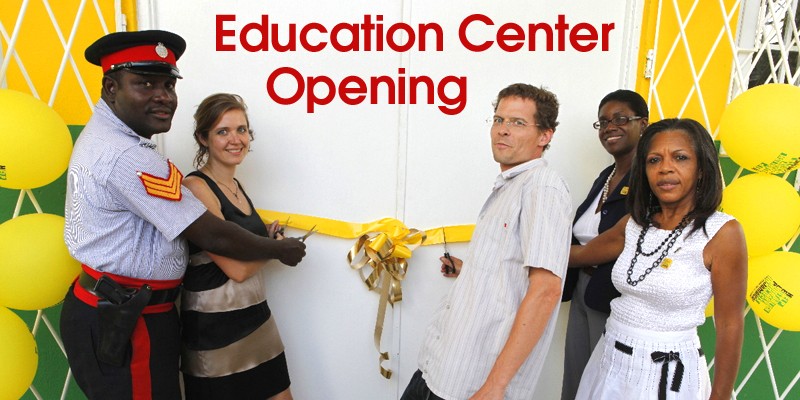 The grand opening and launch of the HELP Jamaica! Education Center in Cassava Piece on February 3rd 2011 was really a remarkable event. After two years of hard work we celebrated the opening with an inspirational theme “Rise up, Cassava Piece!”

Our guests and celebrants were distinguished and diverse in representation; among them were persons from Europe and the United States of America who came to Jamaica specifically for our launch. The German Ambassador in Jamaica, Jürgen Engel, graced us with his presence and greetings. So did the Minister of Industry, Investment and Commerce and Member of Parliament, the Honourable Karl Samuda. Minister Olivia “Babsy” Grange was represented by Mr. Sydney Bartley, the Principal Director of Culture. The Chairman of the Book Industry Association, The President of the Library and Information Association of Jamaica (LIAJA), The Jamaica Constabulary Force St Andrew North Division and members of the music fraternity, the educational institutions in the community, Social Development Commission (SDC), the Kiwanis Club of Constant Spring, member of the press and the citizens were all out in their numbers to support us.

The keynote address was delivered by Mr. Michael Lorne, Attorney-At-Law. In his address he spoke to the relevance of the Education Center, especially in a divided and marginalized community like Cassava Piece. He spoke of the unifying effect of the project pointing to the football tournament held on Saturday 22nd January 2011 as well as the strong support the projects have received from various corners of this fractious community.

In his address the Honourable Minister gave a history of his presence in the community for over thirty-five years. He was very impressed with our achievement in the past year and a half since the idea of the project was first introduced to him. He lauded our progress and pledged his support especially since several attempts have been made to use the space occupied by the Center for community activities. The Principal Director of Culture saluted our venture and also pledged the wholehearted support of the Ministry of Youth, Sports & Culture.

The German Ambassador congratulated the team and in return HELP Jamaica! expressed its gratitude again for the funding of 1.2 million Jamaican Dollar granted by the Embassy. This was used for the refurbishing of the building. 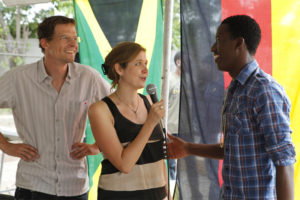 Dr. Paulette Stewart, President, Library & Information Association of Jamaica, brought greetings on behalf of the library community in general and the Department of Library & Information Studies, UWI. She hailed our efforts and expressed the wish for close cooperation. Michael “Muta” Skyers, President of the Citizens Associations, was asked to speak on the Projects impact from a citizen’s standpoint as well as a member of our Institutional Advisory Committee.

The HELP Jamaica team guided through the function and outlined the basic idea and concept of the Education Center as a place not only to learn but for personal development and also the development of the community. The Chairwoman and Chairman gave a joint pictorial presentation entitled the HELP Jamaica! Journey. Here the audience was given an opportunity to learn of the background work done in Europe and Jamaica leading up to this day. The organization’s history and fundraising efforts were spoken on. In her closing remarks, the librarian and project manager Fernette Williams shared her vision of a community library as a central institution for the development of the individual citizens as well as the community. She spoke about the history of the Jamaica Library Service, the public library system and how its early days were devoted to community development. She hailed Dr. Leila Thomas, who recently passed a former Director of JLS and JAMAL whose memory she will seek to honour by emulating her devotion to the concept of life-long learning.

The function further featured touching performances by former Rising Star Romain Virgo, who came to the opening right before he had to sit an exam to share “Who feels it knows it” with the youths of Cassava Piece and encouraged them to study and take care of their education. Camaley impressed the crowd with her rendition of “I believe I can fly” and “My Boy Lollipop”. Darrio, representing the Subkonshens Music Label, gave a stirring a capella encouraging the youths to leave violence and negativity behind and focus on their education. Students of the Constant Spring Primary Junior High delivered a wonderful performance of the 1998 World Cup Football theme song for the Reggae Boyz – Rise Up! The infants of the Lalyce Gray Basic School, not to be out done also came ready to entertain us.

Following the formalities of speeches, greetings, presentations and performances the ribbons were cut to mark the opening of the Center. This activity was done by the Institutional Advisory Committee. The guests and speakers along with about 200 kids rushed into the building and were impressed by their first sighting. Thanks to “Food for the Poor”, the Center was already equipped with Computers and the shelved books, the reading areas, the Tiny Tots section and the homework area offered a first impression of how the Center will be looking like when opening the doors to the public now. The general opening hours are Tuesday to Saturday, 1-6pm.

The afternoon featured various activities for the children like a bounce-about, mural painting and a wonderful performance of the powerful Kingston Drummers. After the performance the kids were treated to a free drum class, a precursor to the activities that will soon be offered at the Education Center.

The HELP Jamaica! team wishes to thank all helpers, donors, supporters and contributors who helped to make the HELP Jamaica! Education Center in Cassava Piece a reality! BIG UP EACH AND EVERYBODY! 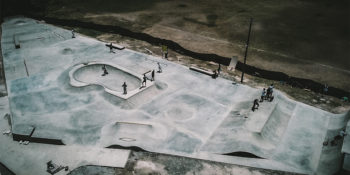 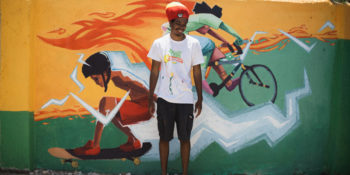 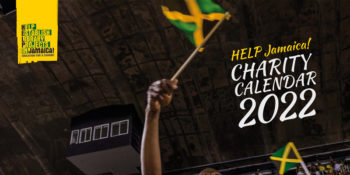